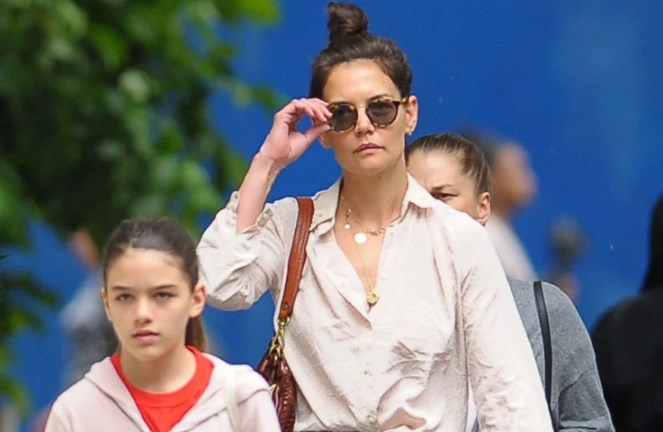 Suri Cruise is grown and a grown-up! Katie Holmes confirmed that the 16-year-old who is with her ex Tom Cruise sang a rendition of “Blue Moon” in the credits opening of her upcoming film Alone Together.
Katie Holmes doesn’t want to wait for the moment to show off her little girl Suri Cruise’s singing prowess.

A Dawson’s Creek alum revealed that she had recruited Suri, who was 16, to sing a rendition song of “Blue Moon” in the film’s opening credits. Alone Together, a COVID-19 romantic comedy inspired by the pandemic she directed, wrote and co-starred in. In explaining her choice to include Suri — who she shares with Tom Cruise’s ex-husband in the film, Katie told Yahoo! Entertainment that “I constantly strive for the top talent, and that’s why I asked her to be part of the project.”

“She’s extremely, extremely skilled. She told me she’d take the initiative and record it. I let her do what she wants to do,” she continued. “That’s my way of directing generally: It’s like”This is what I believe we all want, and do what you want to.'”

Katie said that Suri’s voice will appear in her forthcoming film Rare Objects, which she made last year, but “other aside from the fact that she’s a 16-year-old teenager in high school.”

Then, in a complete circle, Katie shared that Suri also has a connection to the ballad, famously performed by Diane Keaton in the 2014’s And So It Goes. Katie also mentioned that “Diane was my daughter’s friend when she was just twelve years old.”

Suri, for her part, Suri has been largely away from the spotlight since she entered her teens. In November 2020 Katie was able to reflect on how the pandemic gave her the chance for her to “live for a brief moment in time, without the pressure of outcomes,” adding that the “natural rhythms of mother and daughter were the most valuable present.”

“During this period of uncertainty, being positive and creative has been something that I’ve attempted to keep on top of my thoughts,” she wrote in an article in Vogue Australia. “Throughout this time, the main focus that I have experienced has been an increased awareness of every moment and fully taking it into consideration and embracing the moment.”