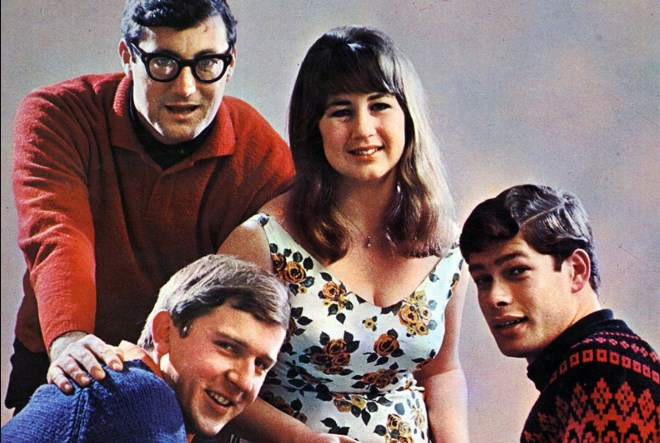 Every Australian knows the lyrics to the Seeker’s songs. Any international gathering will result in The Carnival is Over and Morningtown Ride, as well as Georgy Girl.
Perhaps Judith Durham’s other work – and there was a career in music and albums between 1963 and 2012 – isn’t quite as well-known, but she performed her entire life with the same dark, long bob and straight fringe.

Judith Mavis Cock was a daughter of William Cock DFC (a navigator and World War II Pathfinder) and Hazel Durham (nee Durham). After attending Fahan School in Hobart where she was a close friend of actor Robyn NEVIN, she returned to Melbourne to attend Ruyton Girls’ School.

She wanted to be a pianist, so she obtained an Associate in Music, Australia degree (AMusA), in classical piano from the Melbourne Conservatorium of Music, and studied under Professor Ronald Farren Price, a concert pianist.

Durham began her professional career at a ballet school. When she was 18 years old, Durham began her singing career when she asked if she could join a jazz band. She soon realized that she could perform any kind of music, including blues, gospel, and jazz standards from the 1920s and 1930s.

Durham, then a secretary at an advertising agency, started a new job one day. Athol Guy was her account executive. Durham, by night, was in a folk band called the Seekers.

The guy was joined by Keith Potger, Bruce Woodley and another advertising man. Soon Durham was a regular at their Monday night shows at a coffee shop. Potter, at that time, was an ABC radio producer. He made a demo tape during his lunch hour with the group which was the first album, “Introducing the Seekers”. Although Potter wasn’t supposed to have another job, he did not appear on the cover. Durham recorded two songs more with the Jazz Preachers: Muddy Water (a version of Bessie Smith’s Trombone Cholly) and Trombone Frankie.


The group was eager to travel the world and signed up to perform on the SS Fairsky in 1964 to reach London. After 10 weeks in Europe, they planned to return home but were so impressed by the bookings in England that they decided to stay.

The group released I’ll Never Find Another You in November 1964. It reached No. 1 by February 1965. The Seekers had reached stardom and were now No. 1 in Australia and the UK. The group would release the hits A World of Our Own and The Carnival is Over over the next few years. Morningtown Ride was also released.

Georgy Girl, music by Dusty Springfield’s brother Tom, was the Seekers’ most successful international selling song. It had been originally the title song of the film starring Lynn Redgrave and James Mason as well as Charlotte Rampling, Alan Bates, and James Mason. The single reached No.1 in America and was nominated for an Academy Award.

The Seekers performed at the Myer Music Bowl in 1967 to a crowd of 200,000 people, which was about 10% of Melbourne’s population. The complete recording of that set was not released until 2020. Durham, then 76 years old, marvels at the concert that is still the largest in the Southern Hemisphere.

Durham stated that he had a dry, itchy mouth. It happens sometimes when you have nerves. Durham also said that there wasn’t air conditioning in the room. “It was a Melbourne summer, typical March weather.” “I’ll Never Find Another You” had been voted No. We were No. 1 in the world, and that was a major turning point for us. However, we hadn’t received an overwhelming welcome from the Australian people. This was the reason we were able to perform at the bowl.

It was one of many big moments for the group in 1967. The Seekers Down Under were rated through the roof and the members were awarded Australians of the Year. This is the first time that an entire award has been given to a band.

Durham announced her intention to leave the Seekers in the following year, despite the success of the Seekers the previous year. In 1968, she also made the decision to go vegetarian. She lived a non-smoking life, was environmentally friendly, had no drug use, was teetotal and was cruelty-free.

After deciding to leave the Seekers, she received numerous offers to sing solo. She asked Ron Edgeworth, a London-based musician, to become her musical director, pianist, and arranger. Edgeworth was a well-respected musician who was always in demand. However, he decided to join Durham.

For Christmas with Love was her first solo album. She continued touring, working in Australia and New Zealand, and was always in demand for gigs and nightclubs in the UK. She and Edgeworth were wed in Melbourne in 1969.

Durham sang all kinds of music, from blues and gospel to folk and jazz to blues and gospel to ragtime to classical. She recorded trad jazz albums in the 1970s with Edgeworth and released a recording of her voice and piano from the Newport Jazz Festival in 1978.

Durham and Edgeworth moved to the Sunshine Coast in the 1980s. She concentrated on her writing and performing her own work. She co-wrote the musical Gotta Be Rainbows with Ian Austin.

The 1990s were a difficult decade. Durham, Edgeworth, and their tour manager were involved in a car accident in 1990 that resulted in Durham’s death and left her with a broken wrist and leg. She was not afraid. The Seekers’ silver anniversary was approaching in January 1993 and the group announced a reunion concert. The reunion tour was a success, but Edgeworth was later diagnosed with a motor neurone and died in late 1994.

Graham Simpson published Durham’s authorised biography Colours of My Life: A Judith Durham Story. This was a great part of 1994. This book was so popular that it was reprinted in 1998 and 2003. The Seekers were inducted into ARIA’s Hall of Fame in 1995. Durham was also made a Member of the Order of Australia for his services to music.

Durham released Mona Lisas in 1996, after years of not having an album. This was reissued as Always There in 1996 with Durham’s solo recording, Bruce Woodley’s I am Australian. (With Russell Hitchcock from Air Supply and Mandawuy Yothu Yindi).

Durham was being stalked for several years by an obsessive fan who bombarded Durham with faxes, phone calls, and other forms of harassment. The stalker was eventually convicted and placed on probation in 1998.

Durham’s 2000 album Let Me Find Love was reissued under Hold on to Your Dream. It also included an extra recording of Australia’s Land of Today. In 2001, Durham returned to Australia and in 2003 she visited the UK to celebrate her 60th birthday. In 2004, a DVD was released that included a film of her concert at London’s Royal Festival Hall.

Durham performed a portion of Seldom Melbourne Leaves My Mind at Melbourne’s Lord Mayor’s Charitable Fund in 2006. They invited her to record the song as a fundraiser. Durham eventually recorded the entire The Australian Cities Suite. It was released in October 2008 to raise money for charity. The suite also includes Sydney Girl of My Dreams and Happy Years I Spent In Hobart.

Durham returned to the stage with Colours of My Life, her 50th anniversary, in 2012. Her 1969 album Gift of Song was finally released on CD.

Durham has performed many times with the Seekers over the years, often for charity. In 2013, they reunited for their 50th-anniversary tour. Australia Post presented Durham with a 24-carat-gold “stamp” in celebration of the anniversary. Helen Edwards also painted a portrait of the group in Canberra’s National Portrait Gallery.

After their first concert at Melbourne’s Hamer Hall on March 1, Durham complained of feeling unwell and fell ill with a brain haemorrhage. She was unable to read or write after the stroke and spent several months in rehabilitation. However, she didn’t lose her singing voice as she spoke to The Age in 2019. “The doctor asked me to sing a little bit of a song. I did, and that was Morningtown Ride.